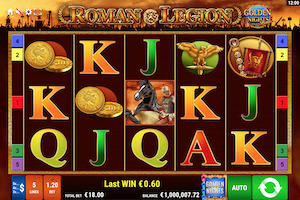 With an interesting ancient Rome-inspired theme, the Roman Legion Golden Nights slot is yet another visually appealing, bonuses-packed Gamomat release. Ancient Rome grew rapidly from a small town into a remarkable empire that at its peak western Asia, continental Europe alongside the Mediterranean island and Britain.

As legends suggest, Rome was founded back in 7533 B.C. by Remus and Romulus or twin sons of the god of war Mars. Rome’s era as a powerful monarchy finally ended back in 509 B.C. following the overthrow of Lucius Tarquinius Superbus who is usually portrayed as rather tyrannical and cruel when compared to his predecessors. With its unrivaled history, traditions, and cultural heritage, ancient Rome remains one of the most fascinating ancient civilizations which serves as an inspiration for movies, books, and online slot games.

One game that celebrates this ancient civilization is Roman Legion Golden Nights. This excellent Gamomat release features super exciting spinning actions that unfold across its 5 reels and 5 paylines. Since all roads lead to Rome, getting there with Roman Legion Golden Nights will cost you only 0.50 credits per spin. Once you get there, you benefit from the game’s replacing wild symbols as well as its Free Games round that delivers loads of free spins alongside sticky bonus symbols.

Join the Roman Army
As suggested by the game’s title, Roman Legion Golden Nights takes inspiration from powerful ancient Rome or more specifically from Roman legions formed the biggest military unit of the Roman Empire’s army. In the republican period, Roman legions consisted of over four thousand infantries while this number reached five thousand infantries in the imperial period.

Naturally, with the very first spin on the Roman Legion Golden Nights slot, you join the Roman army’s soldiers who are more than ready to take down their enemies. When it comes to the game’s artwork, it is similar to other Gamomat releases of this kind. It shows a war scene while the biggest portion of the gaming screen is taken by the reel set. Speaking of the reel set, the reels are populated by standard playing cards and higher-valued Roman soldiers or legions, soldiers riding horses while golden coins, golden eagles, and ancient Roman flags also make their appearance.

The most rewarding standard symbol featured in the Roman Legion Golden Nights slot is the flag which pays up to 20x your stake for five matching symbols on a payline. Other image symbols deliver payouts up top 15x your stake while the least valuable standard playing cards are worth up to 3x your stake. Better payouts of 50x your stake are reserved for coming across five of the game’s fighting soldier symbols. Besides being the most rewarding symbols, these are also the game’s replacing wilds which will complete your winning combos.

Build Your Legacy
To trigger the game’s Free Spins round, you need to collect three of its scattered bonus symbols in any position on the gaming grid on the same spin. Here, you are granted 10 free spins during which any visible wild symbols remain locked in their position for the duration of the bonus. This means you are more likely to score winnings as wilds are sticky.

Just like many other Gamomat releases, Roman Legion Golden Nights allows you to gamble your winnings and you have two options for doing so. You can use the game’s standard card gamble or its more unique risk ladder game. Lastly, there is the game’s Golden Nights Bonus that is present across many other Gamomat releases. To play the bonus, you need to invest extra money, but awesome jackpot prizes offered surely make it worth investing more. With great prized offered up for grabs, joining the Roman army with Roman Legion Golden Nights is worth a shot. 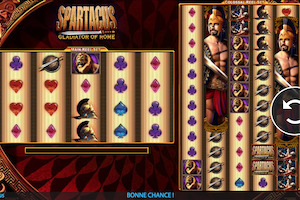 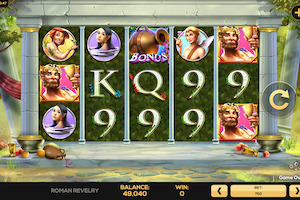 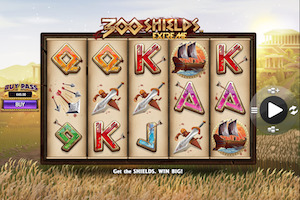 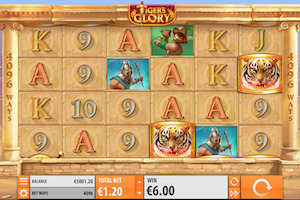 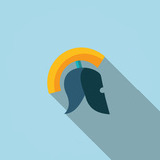