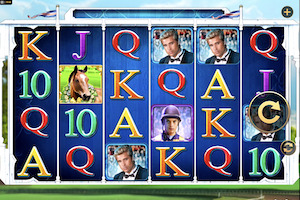 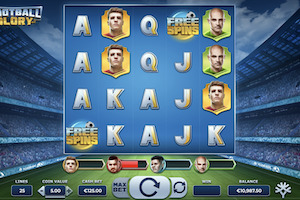 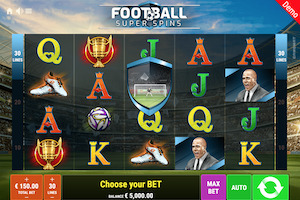 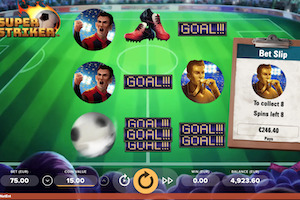 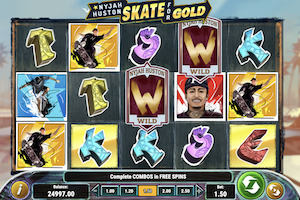 Introducing you to one of the most successful professional skateboarders, Nyjah Huston Skate For Gold slot is an exciting, generous Play’n GO release. As suggested by the game’s title, it draws inspiration from Nyjah Huston who is famed for being the World Championship skateboarder. To refine your skateboarding skills with the champion, invest between 0.10 and 100 credits per spin and explore the game’s lucrative bonuses.

Nyjah Huston Skate For Gold is packed with 5 reels and 10 paylines. Playable across all gaming devices, the game benefits from a Combo Meter feature that can lead to triggering the game’s Wildboard Re-Spins bonus during which wild symbols deliver wild reels and impressive up to 10x your stake multipliers. As soon as you reach the skate park, you can also trigger the game’s Skate Free Spins round and take your shot at winning top winnings of 5,000x your stake.

Show Off Your Skateboarding Tricks
Amazing Nyjah Huston born in 1994 started skating when he was just five years old. By the age of seven, Noah got his first sponsor and the rest is history. After winning the Tampa Am 2005, he turned pro three years later. Today, he is known as the most victorious professional skateboarder. Back to the game, Nyjah Huston Skate For Gold features and interesting graffiti-inspired design. The game’s five reels are set against a skate park while there is Nyjah in the backdrop showing off his iconic tricks.

Matching the game’s skateboarding theme, the reels are populated with S, K, A, T, E letters. Other symbols used in the game include four trick symbols and of course the most victorious skateboarder Nyjah himself that is the most generous symbol in the game as it rewards payouts up to 25x your stake for five of a kind winning combos.

The second highest-valued symbol delivers up to 200, 400, and 2,000 credits reserved for three, four, and five symbols in winning combos. The three remaining higher-valued symbols deliver up to 1,500 and 1,000 credits for five of kind winning combos. The remaining symbols including the letters S, K, A, T, E boost your bankroll with up to 500 credits. The game’s wild has its usually replacing duty. Moreover, wild symbols can expand into a skateboard and cover multiple reel positions.

Turn Pro, Aim for Gold
Speaking of the game’s wild symbol, it should be noted that these symbols also deliver payouts of 4x, 8x, and 40x your stake. This leads us to the game’s bonuses including its Wildboard Re-Spin bonus. On any given base game spin, the game’s Combo Meter can trigger and Nyjah shows off a trick. If the trick symbol lands on the gaming grid, the Wildboard Re-Spin bonus activates.

Then, there is the Nyjah Huston Skate For Gold Skate Free Spins bonus you trigger as soon as you land the S, K, A, T, E golden symbols on all five reels in succession. The bonus instantly grants 12 free spins. During these free spins, the Combo Meter is active and it shows three tricks that trigger the Wildboard Re-Spin like in the base game. In other words, during the Skate Free Spins bonus, you benefit from generous winning multipliers while new trick symbols that land on the gaming grid grant extra free spins. Superbly rendered, Nyjah Huston Skate For Gold is an excellent Play’n GO release that will surely appeal to fans of skateboarding. 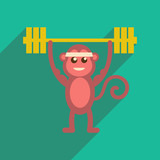 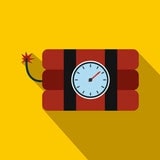